Executives vs. “excusetives” in the year-end results

As the year-end draws closer, a number of companies are preparing the year performance report. Is when a parade of excuses and blaming happens. Executives shows achievements, “excusetives” shows creative justifications. How could prevent the last ones? Here are four golden tips that may help you to get more from your executives. 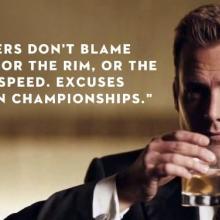 Big companies seems to have a facility to accept bad results. They are too big, small failures does not sink the ship. If the company reaches good results, creates a happy mood that makes easy to accept poor performance in either projects, products or BU. Loses from a specific project could look smaller compared to the overall, good or bad performance. Then loses are accrued, books closed and the life goes on. When fiscal year end coincides with year-end, the Christmas spirit and the hopes for the New Year also helps to accept bad outcomes.

Performance reports brings attached a wide set of creative excuses and justifications. Executives are sometimes worse than kids who claimed the dog ate their homework. Some typical excuses are blaming the economy and the market performance. Is then when you hear thinks like “the market doesn’t behave as expected”. Blaming providers is also very common. The provider does not deliver in the expected date; IT does not deliver the systems needed to launch the product, and so on. When all the results are good, executives could feel comfortable with an average performance. The results are great, so we are good.

Reporting the company performance is not just about numbers, it comes with attitudes and biased thinking that could affect the interpretation. Makes part of our nature wanting to blame somebody else by disappointing results. When an external factor there is available, real or subjective, it looks more convenient. However, executives are hired to deliver results, no excuses. No nobody hired them to be “excusetives”, always having a justification under their sleeve. The following concepts may help to set ground rules, which prevents a march of excusetives at the end of the year.

1) Executive’s mission is not to solve problems, but foresee them. This concept comes from Taylor and reinforced by Peter Drucker. One key activity in management is to plan in antecedence how to reach goals. However, it also implies to plan to avoid anything that could deviate from the path to the goals. From this point of view, would it be acceptable to blame a provider delays for bad performance? Why this was not considered on the planning? What about a contingency? A plan B just in case? Can we blame the key resource who quit or got sick? These things happen; we cannot accept them as “unexpected”. The best executives are those armed with good planning. By setting at the start of the year that these kind of “justifications” will not accepted, the bar is raised to the higher standard were executives should be held.

"But we expected the market to grow x% and it doesn’t”. Nevertheless, the market performance is monitored every month. What is the excuse to not reviewing the goal? No matter what, at the end of the year will be companies publishing good results. Somebody will be doing the business that others do not. The wind is the same for everyone. In either a blue ocean or stormy sea, the company’s performance will depends on the ability to adjust its sails and reach the destination, not in blaming the weather.

2) Improving goal setting. Since executives are creative and convincing, any small crack left in the goal definition opens the door for bad results justifications. A good prevention is to set better goals, narrowing the space for excuses. An example will help to visualize. The BU report that does not launched a digital product because the IT does not developed the product. Question one: who was responsible for deliver the product, IT or the BU? Question two: which was the goal, to launch a digital product or reaching US$X million in revenue through these product sales? To what concerns to the top management, this BU owes the promised US$X million in revenue to the company.

Another case related to goal setting. BU executive reports: “We delivered the expected revenue from the project/product. Unhappily the BAU doesn’t perform well”. Which was the goal? The goal was last year revenue increased, plus the new product/project revenue. If last year BU revenue was US$1 mi, and with this product was supposed to reach another US$1 mi, the expected performance should be US$2 mi. With less than that, excuses will be raining: BU blaming the project team, team blaming the BU, or both saying “Yes!, the project was a success but BAU does not. So we reach US$1.5 Mi and US$1 was from the project, I swear!”. The key is to limit the space for excuses in the goal definition.

3) Comfortably mediocrity. Be aware of not falling in to a comfortably mediocrity when defining a business goal. Some business does not exploit all its potential because they are happy with an average revenue. The executive reports good results, it´s seems everything is on track, but in the long run that could condemn the business. This corporte pathology happens when, for example, the tergeted customers definition could prevent offering services to all the potential market. Even worst, they do not care when another player exploits the space left. Until is too late.

An example of this happened with Cable TV operators in Latin America. They were satisfied offering services thet everyone coulp pay, but only to privileged classes. For years, the revenue was good. Until new players came and offered for everyone, reaching biggest revenues is less time. When defining a goal, the premises setting the bar to a mediocre position, must be duly confirmed, in order to avoid incurring in comfortably mediocrity.

4) Be aware of behaviorial issues. Human brain is not such as rational as we like to believe. Psychologists and behavioral economists tell us that attitudes and cognitive biases affects business decisions, like goal setting and the strategy development. During low performance is possible to recognize common attitudes, considered by the author as “deadly sins” of the executives: excessive optimism, arrogance, abstinence, rational ignorance and fraudulence. For example, a common situation is being “excessively optimistic” during planning. Then, average results appears during the execution in the three quarters, (“because of the market”), followed by a sudden “recovery” in the last quarter, that helped to reach the goal.

Attitudes like the “rational ignorance”, which consist in not having enough data to support our actions, affects our everyday performance. A simple example is applying the rule of the thumb to make million-dollar decisions. Then the excuses at the end of the year. An example of fraudulence is not reporting bad news, sweeping problems under the rug.

The cognitive biases and the attitudes are partners in crime. Example, the wishful thinking during optimistic planning. Arrogance could materializes in the insistency in adopting the first solution that showed up, without regarding the facts showing that could not be the best option. To support this attitude, the brain offers the “confirmation bias”, which consist in underestimate the facts opposing our thinking, while magnifying those supporting our thinking. Just like soccer fans arguing about which team is the best.

Considering these factors, we could better understand why, when Microsoft acquired Nokia, the Nokia executives were so sure of doing everything well, not been able to see why things went wrong. The recommendation for these cases comes from Napoleon: to take cold blood decisions, relying strictly on accurate data, instead of relying on non-confirmed premises or taking guttural decisions.

Preventing excusetives at the end of the year requires mastering tips like increasing responsibility for results; not accepting subjective excuses; limiting the space for excuses with improved goal definition; understanding that good news could hide a comfortably mediocrity and remembering that behind the excuses for bad performance there are a combinaiton of attitudes and cognitive biases.

Companies fail more on execution than in strategic planning. Corporate strategists must harness the power of understanding how these factors undermines execution, to prevent the excuses at the end of the year for poor results.