The Titanic was an ambitious project, projected to reach extraordinary success, but it sank. Why this happened? By going through this interesting historical case, we'll visualize how behavioral aspects could sink the best project or business. These are “must have” concepts for any manager interested in getting the most from its projects. 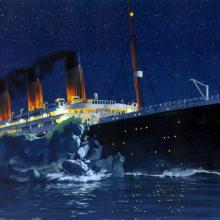 The Titanic was an ambitious project, projected to reach extraordinary success, but it sank. Why this happened? By going through this interesting historical case, we'll visualize how behavioral aspects could sink the best project or business. These are “must have” concepts for any manager interested in getting the most from its projects.

Every time is asked the question “Why did the Titanic sank?”, a common answer pops up: blame the iceberg. A big piece of ice rock unexpectedly appeared on the path on the ship, which cannot avoid the impact and sinking was an inevitable consequence. Something unexpected happened, that´s why the project failed. However, this answer hides the true causes. We can blame either the iceberg, the sea or the weather, in the same way when a project or deal fail, we can blame external factors, the economy, the systems, the market which perform different to the projections. ¿But How many times are blamed internal causes, such as management failures?. Let´s walk through to the Titanic case to help us to visualize some management failures.

The project failure is not due exclusively to factors external to the project, but also internal to the project. Let´s visualize some internal factors exploring the behavioral aspect. A recent research with projects in the biggest companies of the world identified the emotional maturity of the project manager, as a key success factor. In addition, they were identified five (5) attitudes, which facilitate the path to the failure. Here we will refer to them as the “Five deadly sins” of the project managers .

As illustrated in the book “Murphy on Projects: Causes from failures in the projects and as prevent them”©, these sins belongs to a set of factors, which are the perfect soil for “101 frequent cause of failure in the projects” ©. These factors are common not only in big companies from our time, they have been present since Roman Empire times, as well as in the Titanic, until todays NASA’s and US army projects. ¿which are the five deadly sins of the manager and how they materialized in the Titanic project? Let´s start our voyage by reviewing its business case.

The business case backing the project

The early XX century was a time of great opportunities for the inter-oceanic transportation because of the migration from Europe to America. However, The White Star, the company who ordered the Titanic, was in a difficult situation. Since its main competitor had commercial and technological advantage, they were in a hurry to find a differentiated value proposal to offer to the market. The chosen strategy was to offer the most luxurious travel experience, in the biggest and most modern ship of the time.

The marketing of the project was so effective in following this ambitious proposition, that created a blind belief in the grandiosity of the Titanic, that even today, more than a century after, still amaze us. The marketing, combined with the technological advances of the industrial era, such like electric energy, telegraph, steam machines, developed an excess of optimism in the project, to such an extent that many were confident in saying that the Titanic would be impossible of sinking.

The sins during planning and execution.

In project management, how many times has been tried a step bigger than the foot? Problems what could have had a simpler solution, become super complex, expensive projects. The Titanic is an icon of this sin! More than one hundred years later, still we see it as an ambitious project. It had the most recent inventions from the time, elevators, café saloons and a telegraph allowing to the passengers to send “twits” from the sea to the land. This ambition overcame the pragmatic planning, becoming the managers blinded to the technical requirements and deaf to the objections.

Arrogance is the pride authoritarian unjustified, evidenced by a conduct from superiority. Usually it´s translated in the imposition of a point of view, sacrificing of the others.  In the case of the Titanic, the president of the “The White Star” personified this sin. He was a powerful man, a business celebrity with strong character, used to be in control. Following his strategy, forced to sacrifice the security and performance requirements to accommodate luxuries, ignoring all the arguments from the specialists. These cuts contributed to the disaster.

Do this situation remember you any experience? ¡Please comment you experiences at the end of this article!

Here we refer to the rational ignorance, which consists in taking decisions without having either the information or knowledge necessary to support them. In the Titanic, no matter how rich and famous were the presidents of the companies involved, they do not had technical knowledge to support their decisions. Without considering technical objections, they took wrong decisions, incurring in the deadly sin of rational ignorance. Just like when somebody said: “I want this, I don’t care the technical details, find a way!”. Any familiarity with this kind of situation is not a coincidence.

This sin consist in the abstinence of taking part or contribute. Exists a case particular from abstinence what characterized the style from management called “laissez-faire”, where the manager omits himself, serving barely as a bridge between the client and his team, never assuming responsibility by the results. The bad results are always someone's fault, never manager's fault.

In the Titanic, the sin of the abstinence happened when the professionals who had technical knowledge to object requirements imposed by the presidents, omitted his opinions, letting the problems evolve. Some refrained of acting because their recent promotion, in substitution of those who dared to warn about the risks, and who were fired because of that. Besides of avoid to question who promoted them, they do not wanted to be left out of such emblematic social event.

Have you witnessed the “prophets of the past”? Those who appear at the end of the project saying, "I knew it was going to go wrong”. If they knew, was their professional obligation alerting and helping to find a solution!

There is an important observation to be made regarding the abstinence. When they omit themselves, they are also attempting against an important principle of the corporate governance: the transparency.

Fraudulence is the action of trying to cheat, deliberately and in a misleading way. Fraudulence is opposite of true. Is the difference between the speech and the action.

The fact of the Titanic having four smokestacks, when it had only three engines, exemplifies the sin of the “Fraudulence”. The fourth smokestack was placed to make it look more powerful than it really was.

Another situation is still more emblematic of this sin: the tests in sea rails, which should have taken four (4) weeks, were made in barely half day. There were so much overconfidence in the project, than the Titanic went to ocean without enough testing. Does this situation looks familiar?

The Titanic do not sank because it hit an iceberg on its way, but because the incompetence of the managers for avoiding the accident. Let us remember that mission of the manager is not to solve problems, but avoid them! This comes from Taylor until Drucker.

In fact, the iceberg should not have been any surprise, because the region where happened the collision was known as “The Valley of the icebergs”. Even worse, before the Titanic, others ships went through the same region and even warned the Titanic about the icebergs. So, why only the Titanic failed in dodging the iceberg? The five deadly sins and other factors (other factors area approached on the book “Murphy on Projects”,), contributed to generate the conditions that made possible the biggest naval tragedy, in peace times.

The Titanic´s project in the early of the last century, allows us to visualize the attitudes as failure factors. There are a lot to say about the Titanic, many other factors to explore. The five deadly sins are only the top of the iceberg, there is a lot more to be say, regarding the behavioral component in projects.

Business and projects do not fail only by lacking knowledge either by lacking the proper tools. In the biggest companies of the world, which has the best resources, between 70% - 80% of their projects fail. Many of the "101 frequent causes of failure©" in projects, have its roots in the complexities that the human behavior introduces in the project management. Is not enough to have knowledge in methodologies or tools. Is necessary for the manager, to develop new skills that allow him/her, to address these kind of challenges.